Although Snake had left The Wildhearts (or The Wild Hearts as they were called during his tenure) by the time they were signed to EastWest, he was a key character in the early days of the band’s story, yet is often overlooked when it is told. 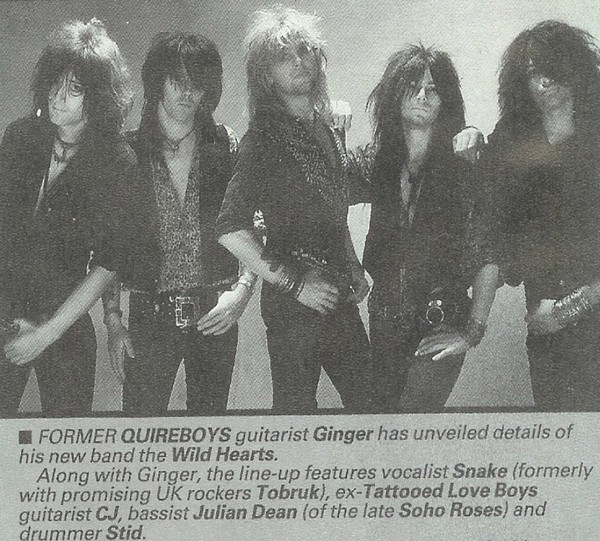 From an early age, Stuart John Neale, was a fan of rock music and even filled his acoustic guitar with concrete in the hope it would produce a heavier sound. At school he was given the nickname Snake for his ability for getting away with bad behaviour such as having a crafty fag and generally being able to get out of any situation.

As a youngster Snake started out in a band called The 4teens who would share stages with the likes of Del Shannon and Billy Fury. Following this he had short spells in the bands Newsflash, Hush Hush, then Stranger who were absorbed into Tobruk with Snake, guitarist Nigel Evans and keyboard player Jem Davies joining original members Mick Newman (guitar) and Steve Woodward (bass). After recording a live session on the influential Friday Rock Show on BBC Radio 1, the band were picked up by well respected NWOBHM label Neat Records, who released the single ‘Wild on the Run‘ in 1983 which in turn led to Tobruk securing a record deal with major label, Parlophone. The début album, also called ‘Wild on the Run‘, came out two years later, but despite two well received singles, a UK tour and a number of festivals sales were slow. This caused friction between the band and label which came to a head during the recording of the follow up, ‘Pleasure + Pain‘, which was shelved by Parlophone. By the time it finally seen the light of day in 1987, after being picked up by FM Revolver, things had already unravelled with Snake and Newman leaving the band.

Snake then joined Idol Rich (sensibly changing their name from Hooker) who by then had released an EP titled ‘Working Girl‘ on the small independent SRT label. However, this would be the band’s only output when the band folded in 1988, before Snake could feature on any recordings. He then went onto join former Quireboy, Ginger‘s fledgling band, The Wild Hearts and even dyed his trademark blonde locks dark for the job. Early gigs were given positive reviews in the rock press, with Raw‘s Dave Ling calling a support slot with No Sweat “a tour-de-force which came mighty close to stealing the show” and it wasn’t long before labels came sniffing round. The Wild Hearts had signed a deal with Atco Records, a subsidiary of Atlantic, and recorded what was to be a five track EP at Jacobs Studios in Surrey, with Poison producer Ric Browde. However, Ginger became concerned with the terms in the contract and hired a lawyer who set about annulling the agreement, a move which would ultimately see Snake being one of many line-up changes in the band’s early days.

Following his departure, Snake jetted off to Ibiza for a couple of seasons playing in a four piece covers band to 18-30 holiday makers. In 1992, he moved on to Lanzarote for a number of years playing to a similar audience in a duo, and then as a solo artist. Whilst in Lanzarote, he suffered a serious boating accident on a fishing trip, from which he almost died and was left deeply scarred, both physically and mentally, by the experience. In the last years of his life he moved back home to Kettering, Northamptonshire where he had good and bad days battling alcohol.

Despite his problems, Snake was a well known character and well loved by friends, who describe him as the kind of man who would do anything for anyone, and always had time for people no matter how low inside he was feeling himself. He had a number of high profile friends among the UK’s heavy metal scene including Ozzy Osbourne and Rick Savage of Def Leppard, the former once quipped that if ever a biopic was to be made about him, he wanted Snake to play the lead.

Although they had gone their separate ways years earlier, Snake remained a fan of The Wildhearts and after one show at The Roadmender in Northampton, he hooked up backstage with Ginger to whom he presented the master tape of the band’s old demo recordings. After which he proceeded to jump fully clothed into the shower with Danny and spent the car ride home drenched to the skin.

Snake died on 20th December 2006 from congestive heart failure, but will be remembered fondly as a good friend by all who knew him and by fans who loved his unique voice and knack of being able to turn a dull audience into a half decent one with his great stage presence. He was aged just 43.